If you wish to follow in the footsteps of Robert Burns, Scotland’s Bard, you must begin your quest at the ‘auld cley biggin’ now known as Burns Cottage in Alloway, Ayrshire. The white, thatched cottage sits in the grounds of the small farm where he looked after the crops and is where Burns lived with his family and their animals.

Leaving the cottage behind, cross over the road and walk along the ‘poets pathway’ adorned with weather vanes depicting the story of Burns favourite poem ‘Tam O’Shanter.’ Further along you will find a statue of a mouse representing the poem ‘To a Mouse’.

Continue to the end of the path and soon you will see the Robert Burns Museum building. This where you can find out more about the great man, handle some of his artifacts, examine his manuscripts and much, much more.

Within the grounds behind the museum you will discover the Burns Monument and Gardens. Here you can climb to the top of the 70 foot high Grecian styled temple set up by the supporters in memory of the great man. You can also take time to wander through the beautiful gardens.

Robert Burns may have begun his life in the little white cottage but he only lived there until he was 7 years old and then his father moved the family to nearby Mount Oliphant Farm where the work was hard and had a detrimental effect on Burn’s health. This was followed in 1777 by another move to Lochlea Farm where the family grew flax plants – all of the farms being in the area of Alloway. 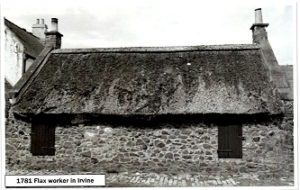 The next step in your journey will take you to the nearby town of Irvine. Keen to learn more about the process of what happened to the crops he grew, in 1781 Burns spent nine months in Irvine learning the flax dressing business. Breathing in the dust from the flax did not help his health. However, he spent much of his spare time frequenting the bookshop of William Templeton and could often be found down by the harbour in conversation with Captain Richard Brown who encouraged Burns to publish his poetry. Truly, if Alloway was considered to be the birth of the man, Irvine could be thought of as the place where Burns the poet was born. To learn more about Burns life in the town you must make a visit to the Wellwood Burns Centre and Museum.

Continue with your quest and you will have to travel to the town of Mauchline where Robert and his brother Gilbert, purchased Mossgiel Farm. This was when the family changed their name from Burnes to Burns and it was here that Burns met his true love, Jean Armour. Today Mossgiel is a sustainable, organic farm.

It was also where his first illegitimate daughter, Elizabeth Paton, was born, referred to as ‘dear bought Bess’ by the poet because of the trouble it caused him. Elizabeth was brought up by Burns’ mother and later married a local farmer called John Bishop before moving with him to the area of Polkemmet. Should you travel to the town of Whitburn, half way between Glasgow and Edinburgh, you will be able to see the headstone erected in her memory.

To find out more information about Robert Burns time in Mauchline, visit the Burns House Museum where the poet resided whilst Mossgiel was being made ready for habitation.

Two years after settling at Mossgiel, Burns’ poetry was beginning to take over his life and in 1786 he made his way to Edinburgh where he was accepted well by society. It was here that he saw the publication of his poems gain him noteriety and led to him travelling to the borders.

Eventually, he returned to Mossgeil to finally take Jean Armour as his wife before purchasing Ellisland Farm on the outskirts of Dumfries.

It was in the town of Dumfries that Burns died on 25th July 1796, the same day that his son was born to Jean Armour. His body was laid to rest in the north eastern corner of St. Michael’s graveyard but his followers collected enough money to build a mausoleum to the great man. Finally in 1817, Robert Burns’ remains were removed and placed beneath the floor of the beautiful mausoleum.

As you can see, if you wish to follow in the footsteps of the Bard you will have to travel from Alloway, to Irvine, Mauchline, Edinburgh and finally Dumfries discovering all the facets of the great poet’s genius.